Second year DPhil candidate Will Smith was awarded the Charles Darwin Award and Marsh Prize for the best undergraduate project submitted by a university student in the UK. Will studied Biology at undergraduate level at Oxford, and is continuing his research on rock doves here. We're sure this is the first of many brilliant ways his research will be recognised!

We asked Will for a summary of his outstanding research project: 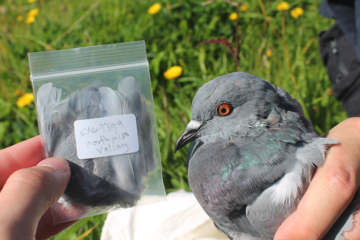 "For my undergraduate project, I was really excited to have the opportunity to do something that hadn’t been done before. The obscure status of the rock dove Columba livia, the ancestral form of the domestic pigeon (and therefore also the feral pigeon we see all the time), was something that really fascinated me. The rock dove is often said to live in remote regions such as the Outer Hebrides, nesting in caves and ruins. The extent to which they exist in anything close to their original form is now unclear, because they hybridise with introduced feral pigeons. I find it really interesting that in a place as well studied as the UK, there is a bird we know so little about!

"I was lucky enough to have a really supportive tutor, Lindsay Turnbull, who encouraged me to follow through with this idea, and so I looked at whether rock doves and feral pigeons are still genetically and phenotypical different from one another. This project was supervised by Annette Fayet and Steve Kelly, an expert ornithologist and bioinformatician respectively. I collaborated with citizen scientists to catch and measure rock doves all over the British Isles, and in the end we discovered significant differences between them and feral pigeons, showing that there is a rare form of pigeon still living in the British Isles today. The data also suggests that the continued existence of the rock dove is at risk due to hybridisation causing a breakdown in the genetic integrity of the rarer form. I really enjoyed the project and am very happy with the result, which shines a light on an under-appreciated but super interesting bird.

"I am now working on a DPhil supervised by Sonya Clegg and Ben Sheldon, looking at rock doves in more depth to identity how much the level of hybridisation varies across Scotland. This is of relevance for the conservation of the ancestral form, but will also hopefully shed some light on the evolutionary role of hybridisation! Hopefully it will lead to some cool publications on a bird that, up to now, has escaped notice - but is an important relative of a superabundant domestic animal, and therefore plays an important role in human history. I am really grateful to all the great scientists mentioned in this article - who have mentored me in exploring such an interesting process, and inspired me to ask so many questions about how it works."