New research from the University of Oxford, published in Molecular Ecology, confirms that population founding is not a radical shortcut to speciation. 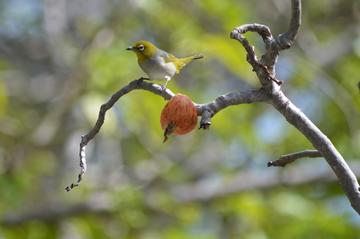 What can a small green bird tell us about the evolutionary consequences of population founding? As part of his PhD research Dr Ashley Sendell-Price used island colonisations by the silvereye bird (pictured) to study how population founding shapes patterns of divergence and diversity across the genome.

This research makes use of the silvereyes’ historically documented colonisation of New Zealand and outlying islands taking place over the past 200 years. These populations differ in the number of founding steps separating them from their original Tasmanian source, creating an ideal system in which to track how divergence accumulates between founding steps.

By sequencing the genomes of individuals from these populations, the researchers found that levels of divergence increased when populations were separated by multiple founding steps, however, in no case did levels of divergence approach that seen in evolutionary older populations. This finding, which builds upon the PhD research of his supervisor, Professor Sonya Clegg, confirms that the 'founder effect' speciation model, the controversial idea that speciation can occur suddenly when populations are established by few individuals, is very unlikely to happen in nature.

One of the reasons why the researchers think that founder effect speciation is unlikely to occur in the silvereye is that these recently founded populations are often established by large flocks, likely blown off course during storms. Using demographic modelling the researchers estimate that most of these populations were founded by 100+ individuals. Dr Sendell-Price says “such large founding flocks are too large to produce the extreme shifts in allele frequencies required by the founder effect models of speciation”.  But even with extremely small founding population sizes, such as that seen in the artificially established Tahitian population evidence for founder effect speciation is also lacking.

The researchers also found that highly diverged regions of the genome were rarely maintained between founding steps. Instead, patterns of divergence across the genome appear to be highly idiosyncratic. Dr Sendell-Price says “such idiosyncrasies could reflect different selective pressures on the various islands, but as highly diverged regions of the genome rarely overlapped loci under selection we instead believe these differences can be attributed to the stochastic nature of the founding process itself, primarily due to changes in the frequency of rare alleles”.

Moving forward, Dr Sendell-Price plans to make use of the numerous avian introduction events that have taken place across islands of the Pacific to better understand the role of chance events in shaping the evolutionary trajectory of populations.