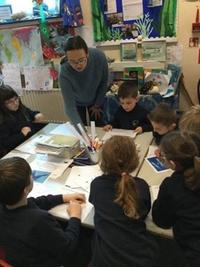 Martyna Syposz, Rebecca Goldberg and April Burt spoke with seven and eight year olds about the hardships of removing plastics from a place located a thousand kilometers from the closest civilisation: the Aldabra Atoll.

Aldabra Atoll is an astonishing island with countless animals nesting on the beaches and trees, as well as in the coral reefs surrounding the atoll. Unfortunately, Aldabra is also covered with tonnes of marine debris that have been accumulating on the beaches for years. The students asked a lot of questions about the trip and came up with their solution to solve the problem of plastic pollution in the World.

Martyna said: "We invited the children to join three exercises, including drawing animals from Aldabra, sorting rubbish and getting to know sea creature artefacts. The children were very enthusiastic, curious and engaged in the fun activities. Teaching children about the appreciation towards nature, as well as dangers of the plastic pollution is important from the very early stages of their life. Children are future stewards of the earth. In order to raise adults who are passionate about protecting the environment and preserving our planet, they must first learn about the nature and develop love for it."