Climatic changes affect species distribution globally, changing the makeup of the animal communities in certain habitats. While computer modelling shows this clearly, empirical evidence is more difficult to provide, as it requires the collection and collation of long-term wildlife tracking and climate data.

This study analyzes the dual effect of climate change and other manmade changes to resource availability on roe deer in the Eastern Italian Alps, where the species exists at its altitudinal range limit.

“Roe deer are an ideal species to conceive such a study”, states Dr. Francesca Cagnacci, from Department of Biodiversity and Molecular Ecology of Fondazione Edmund Mach, Italy, “because they are constrained by winter harshness through resource limitation, and are capable of quickly adapting to environmental changes—a phenomenon termed ‘ecological plasticity’.”

The researchers used data sets collected in two projects examining roe deer movement and space use in the same area, one from the early 2000s and the other from 2012-2015, over a decade later.

“We had a combination of old and recent telemetry data that overlapped spatially but over a decade apart, which was very fortunate, because this is a climatically-sensitive region as well as being at the limit of the species’ range”, explains Julius Bright Ross, the first author of this paper, which he began as part of his Senior Thesis at Harvard University’s Department Organismic and Evolutionary Biology, under joint supervision of Prof. Paul Moorcroft and Dr. Cagnacci, and completed during his time at the University of Oxford. 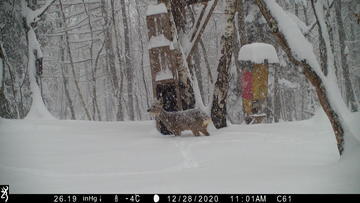 These telemetry data were not enough to analyse the detailed habitat selection involved in animal space-use. To do this, the team needed snow depth measurements at a 10x10 m scale. They derived these using data from climatologists Drs. Emanuele Eccel and Emanuele Cordano, whose GEOtop hydrological model uses meteorological data from 23 weather stations across Trentino. This model produced estimates of snow depth over the entire study area for the periods studied, and predicted further changes in the snowpack over the next 50 years.

The team found that the increased scarcity of snow cover at intermediate altitudes has already caused changes in roe deer’s space-use patterns, with more use of higher altitudes and a reduction in the variability of space-use over the years. This could eventually diminish roe deer’s migratory behavior, which normally allows them to escaping unfavorable conditions in winter.

More importantly, if roe deer tend to move uphill in winters with little snow cover, they can become more susceptible to sudden extreme weather. In particular, the presence of manmade feeding sites, which roe deer began to use in the team’s study site irrespective of snow depth, might not prove beneficial for the species long term, acting as a sort of ‘ecological trap’ by attracting individuals who cannot escape when conditions become harsh.

“We have innovatively used the technology at our disposal to understand the future of a typically alpine species in relation with climatic and anthropogenic changes”, Dr. Cagnacci concludes. “We hope that this and others’ findings will permit the development of appropriate strategies to preserve the Alps, which represent a unique and irreplaceable source of biodiversity”.

The paper’s findings are thirteenth in a series of scientific outputs from the trans-European EURODEER database of roe deer telemetry, and form the basis for further research into ongoing and future changes in these delicate ecosystems.

To read more about this research, published in Scientific Reports, please visit: https://www.nature.com/articles/s41598-021-86720-2