Picking up good vibrations: Feeling the beat through the elephants feet

Iconic and intelligent creatures, elephants continue to fascinate curious onlookers and scientists alike. Now a new Oxford University collaboration with Save The Elephants has shown that elephant behaviour can be determined in a new way: through the vibrations they create.

The findings of the study, published in the journal Current Biology, offer a new way to detect elephants and discern their behaviour without having them in sight. It also has the potential to provide real-time information on elephant distress and poaching threats in remote locations.

Researchers from the University’s Department of Zoology and Earth Sciences worked together with Save The Elephants to develop an innovative way of classifying elephant behaviours by monitoring the tremors that their movements send through the ground.

The team also performed an active but complementary experiment wielding a sledge hammer against the ground, which allowed them to generate and measure a controlled vibration, and recorded the sound of cars, people hopping up and down, planes flying overhead and a variety of other noises that contributed to the signals scientists might pick up when recording elephants.

Due to their large size, it is perhaps unsurprising that elephants generate vibrations through their normal movements. But, they also produce detectable seismic vibrations through low frequency vocalisations – known as ‘rumbles’, which were studied in the research, as well as trumpets.

These movements were then compared with the airborne and ground-based vibrations that they produced. By distilling the vibrations caused by elephant behaviour from background noise, and by quantifying how far and wide these sounds travel through the ground, this study demonstrates that seismological techniques are well suited to solving problems within conservation monitoring.

Vibration detection is a forgotten sense in the study of many animals, but is particularly important for elephants,’ says Dr Mortimer. Due to their large size, it is unsurprising that elephants generate vibrations through their normal movements. But elephants also produce detectable seismic vibrations through low frequency vocalisations – otherwise known as ‘rumbles’.

Computer models developed in this research indicate that these vibrations are detectable beyond what is audible, suggesting that elephants can use ground-transmitted information to know the whereabouts of the rest of the herd, even over several kilometres, depending on terrain type.

Scientists and conservationists are increasingly worried about the effects of noise caused by humans. By preserving wild landscapes, elephants can continue to detect the signal above the noise. ‘The impact of other noise on this mode of communication mode is particularly worrying given the increased levels of human-generated seismic vibrations in remote locations,’ says Dr Beth Mortimer.

Save The Elephants’ CEO, Frank Pope comments: ‘Legends and folklore have long spoken about the way elephants can not only communicate across long distances, but also detect other events that shake the ground like far-off thunder. This study marks a new phase in trying to understand the nature of the vibrations elephants produce and how they might be used by elephants themselves. Along the way it is opening our eyes to the challenges posed by human-generated noise in an increasingly crowded landscape.’

‘We hope to build on these initial findings to develop a comprehensive approach for monitoring and understanding the behaviour of large mammals in these pristine, changing and fragile environments, and examine whether elephants can localise not only their peers or other species, but also environmental factors such as water’ adds Nissen-Meyer.

By preserving wild landscapes, elephants can continue to detect the signal above the noise. 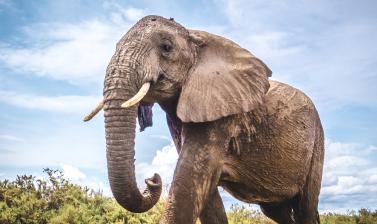 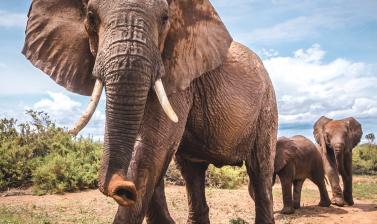 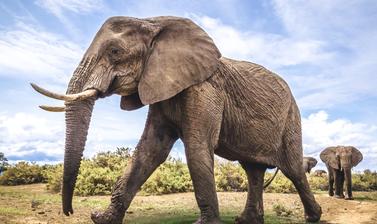