As part of the new orientation period for the MBiol Biology course here at Oxford, we had to complete a range of ‘mini-projects’ over our fourth week. Our group chose the brief: “Does the success of a conservation story on social media vary depending on whether it has a pessimistic or optimistic framing?” We started by thinking of the success of a conservation story in terms of its engagement on social media, coming up with three routes to get data on the question, before analysing our results and presenting our conclusions to the other biologists at the end of the week.

Posting two versions of an article to social media

We found two papers by Samuel Perkis and Bernard Riegl, with other investigators, about heat-adapted corals in the Arabian Gulf. The researchers were suggesting that even these most heat resilient corals in the world were undergoing bleaching events, a very gloomy scenario for reef-conservation. But they also suggested that assisted migration of these reefs to other areas in the Indian ocean which were relatively cooler and which the Gulf corals would survive in, could be a viable way to maintain the reef ecosystem in these areas, many of whose normally resident coral species, not as heat-adapted as the Gulf species, were undergoing bleaching. So a solution-based perspective on an otherwise gloomy situation, injecting some optimism into the climate/ coral story.

We wrote two articles, one focussing on the Gulf coral bleaching and one focussing on the potential for these species to help Indian Ocean reef ecosystems. Both had a similar first half, emphasising the benefits of corals to biodiversity and human well-being, before explaining coral bleaching and its relation to climate change. The headline of the pessimistic article was: “Even the Best Heat-Adapted Corals in the World are Doomed by Climate Crisis”, and the optimistic article: “Heat-Adapted Corals in the Arabian Gulf Offer Hope for Reef Conservation”.  We then posted these on various social media accounts, along with videos summarising the articles. These videos contained a brief version of the information in each article and were made as a way of catching people's attention and contributing to the optimistic and pessimistic angle of the posts. Moreover, since we were posting on our personal social media accounts, we knew our audience included a lot of young people who may be more inclined to watch a video than read an article. So the videos were a way of providing such people with the same news story but in a format they would engage with.

The metric we wanted to use to measure engagement would be to take the ratio of the number of reads to the level of ‘noise’ (likes/reacts, comments, shares, retweets). This would show how active the engagements with the articles were. Unfortunately, we posted to Instagram which does not allow easy engagement with stories, and due to a technical issue with one of our Twitter retweets, some views were not registered to our account statistics. However, our Facebook data was reliable and suggested no difference between optimistic and pessimistic story engagement (somewhat in contradiction to our other findings in the next section). 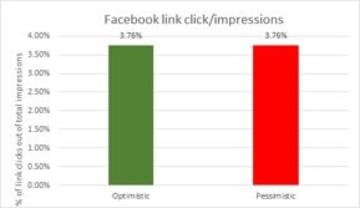 Data from the blog site we used (medium.com) did accurately tell us how many people engaged with the different headlines. We looked at the ratio of ‘impressions’, how many people had seen the link to the article on the various sites we posted it on, to the ‘noise’ for each headline. Looking at this we found there to be a slightly higher ratio for the pessimistic article on Instagram and Twitter, and the same on Facebook. However, it is possible that the Twitter repost could have skewed the Twitter (but not the Instagram or Facebook) data slightly. 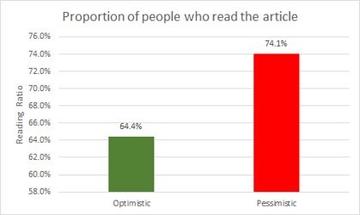 Analysis of Guardian articles from the last six months

As well as this, we collected a database of around 80 positive articles (both climate and conservation based) and around 80 negative articles written by the Guardian since they replaced the term ‘climate change’ with more urgent terms such as ‘climate crisis’ in April. We found the number of Facebook shares, likes, reactions, etc, for the optimistic compared to the pessimistic articles (optimistic were defined as positive action being taken or hopeful stories about conservation/ climate while pessimistic was climate/ conservation inaction and stories about the negative consequences of climate change, lack of conservation, etc). A t-test found a significant difference between the number of Facebook shares between the two groups, with pessimistic articles having significantly more shares than optimistic ones, although the difference between other metrics collected was not found to be significant (this could be because there truly was no difference or because within the two major categories we grouped stories together instead of separating them into political/ social and biological. There were similar numbers of political and biological articles in each group). 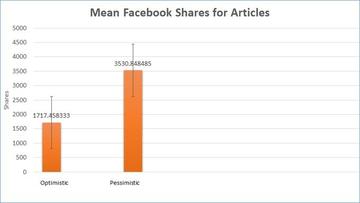 A survey allowed us to put our results into context

We had found that, at least in some circumstances, pessimistic stories were shared more widely on social media. However, it was important to work out if digital action (sharing, liking, etc) translated into ‘real life’ action. We defined the latter group as volunteering, donating, making lifestyle changes and attending climate strikes (as many of the respondents would have been students it seemed likely many of them would have had the opportunity to go on strike). Our results (below) suggest that those who did post about environmental issues on social media were indeed more likely to perform all of these actions, and less likely to have performed none of them.

Our finding that the pessimistic headline had a higher engagement could explain Lisa Johns and Jennifer Jaquet’s observation that headlines about ocean conservation issues in America had more alarmist ‘doom and gloom terminology’ (Johns & Jaquet, 2018), since it makes sense for news-outlets to use this terminology if it means that people will click on the article or engage with in some way. However, it may be irresponsible to do so, since people may read the headline without looking at the article, fuelling a more pessimistic view of environmental issues, which can lead to decreased motivation for change, as emphasised by the Conservation Optimism movement. On the other hand, if, as our Guardian data demonstrated, negative framings are best for generating social media engagement and social media engagement is linked to real-life action (as our survey suggests), presenting negative (where the facts back this framing up) perspectives may be the best way to encourage much-needed action. Of course, our Guardian study only contained stories from one news outlet (because if we used more than one we would have had to standardise the results taking into account the different sizes of the readerships, which would have been a very difficult task, considering how variable these sizes are) so only showed data from one group (i.e. Guardian readers). Perhaps readers of The Sun would have responded differently, for instance. Our survey data to some extent also has this issue (as most respondents were students) and did not have as large a sample size as a survey done by a group with more resources could have had. It would be interesting to see what the results of a similar study, but with a larger sample size for the survey and a wider range of news outlets for API analysis, would be.

Finally, whatever the results of a theoretical larger study could be, it is also possible that these results are themselves a result of the balance of optimistic and pessimistic stories people encounter every day. If this balance were to change, perhaps so too would the number of shares and the real-life responses optimistic and pessimistic environmental stories generate.