The conservation of wildlife is complex and often contested, particularly when the species concerned is large, charismatic, with monetary value, and whose presence in an area can cause major direct impacts on people's lives. Such is the case for Africa's elephants, but it is true for other species as well, including big cats, large ungulates (hoofed mammals) and wolves. Conflicts over how to manage these species are widespread and challenging to resolve.

In particularly high profile cases, the public debates around these conflicts can become very heated and emotional.

In the case of elephants, heavy poaching in some African countries has caused deep concern for the species' future, and a range of approaches to addressing this poaching has been put forward and strongly championed by different groups. These range from complete trade bans (e.g. Born Free's Bloody Ivory campaign) to limited sales of confiscated ivory (e.g. as proposed in 2016 by Zimbabwe). The confrontational nature of the discourse is clear when observing the media furore that surrounds international meetings where the ivory trade is discussed, particularly the triennial meetings of the Conference of the Parties to the Convention on International Trade in Endangered Species (CITES), the most recent of which was in September 2016.

This debate is heavily fuelled and mostly carried out by campaigning conservation organisations. In the heated atmosphere, the underlying values and motivations of those holding different views are questioned, sometimes destructively, and evidence is often interpreted and deployed in a strategic or partisan way.

This is not helpful either for elephant conservation, or for the governments of countries where elephants live, who are trying to manage their elephant populations under difficult circumstances and with limited resources.

Meanwhile, for more than two decades, African countries have been sharing views with one another and gaining mutual understanding through a series of dialogues,. Over the years, supported by CITES, they have worked to develop and adopt two unique and extensive monitoring programmes (Monitoring Illegal Killing of Elephants and the Elephant Trade Information System, MIKE and ETIS) which provide information to CITES Parties about elephant killing and ivory seizures.  These two systems, as well as the IUCN SSC African Elephant Specialist Group’s African Elephant Database (AED, where information on the numbers and distribution of African elephants is stored), have provided the information underpinning conservation policy-making. Building on this information, range states worked together to develop and implement the African Elephant Action Plan, which prioritises conservation actions, recognising and respecting the very different circumstances in different parts of the continent.

Despite this huge investment of time and resources into elephant conservation, poaching continues, public concern remains high, and the best way forward is highly contested, particularly in the international media.

An important component of successful conflict negotiation, whether in conservation or other fields (such as national peace processes or climate negotiations) is to hold discussions of the main affected parties away from the glare of the media. such as the African Elephant Range States dialogues. In other fields (particularly fisheries management), these discussions have included the use of formal structured decision-making processes such as Management Strategy Evaluation. These processes go a step further than is currently done in species conservation (including for Africa's elephants). For elephants, this would start with the agreed goals and priorities of the African Elephant Action Plan.

Then researchers would compile and assess all the evidence that exists about elephant poaching and ivory trade, including the existing databases like MIKE, ETIS and the AED, but also local studies of poaching behaviour and consumer demand. This would help us to understand what the uncertainties and knowledge gaps are. Next, this evidence-base can be used to build and test computer simulation models, to explore the conservation outcomes of different potential policy options, at different scales from the local management of Protected Areas in Africa, to initiatives that aim to change consumer preferences in Asian countries.

The questions to be addressed would be decided by the African elephant range states, with scientists acting as facilitators and technical support, rather than initiators. When used in this way, structured decision-making processes have already proven to be effective at reducing negotiation times and conflict, and improving conservation and livelihood outcomes, in a variety of contexts. But they have yet to be tried in species conservation.

In a paper published today, my colleagues and I suggest that it would be worth exploring whether following a formal decision-making process would be useful for African elephant conservation. Using these methods could clarify the likely consequences for elephant conservation of contentious policy questions such as the burning of ivory stockpiles, allowing limited legal trade, or closing domestic ivory markets.

It would also clarify where we need to do more research, if we can’t predict the consequences of particular actions based on what we already know.

We also highlight the importance of understanding and respecting the values held by people who see things differently, and recognising that these values may inform the way in which evidence is viewed and interpreted, sometimes subconsciously. Starting from a position of openness and respect for others' dilemmas is an important part of building trust and moving any debate onto a more constructive footing. This message is aimed more at campaigning international conservation organisations than at those already engaged in elephant management on the ground, who are generally well aware of the challenges and trade-offs inherent in real-world conservation.

Issues like elephant poaching for ivory will always rouse an emotional reaction, and rightly so. However the threat from poaching does need to be set within the wider context of issues such as loss of habitat, connectivity, food and water resources, which also threaten the future of African elephants.

Donors need to continue to support dialogue among the range states and the further development of databases such as MIKE, ETIS and the African Elephant Database. They need to also support efforts to better forecast and plan in an era of rapid land transformation and resulting habitat loss across Africa. With the added elements we suggest in our paper, we hope the unconstructive public debates which rage around the issue could be dampened down. This would ultimately benefit the conservation of Africa's elephants. Most species do not attract the huge media attention that elephants do, but they too could benefit from the approaches we lay out in our paper. These are already well-used in other fields (like fisheries management and climate change) where similarly difficult decisions need to be made, despite not having all the facts, and where the people involved may have very different perspectives and interests.

Elephants around the watering hole 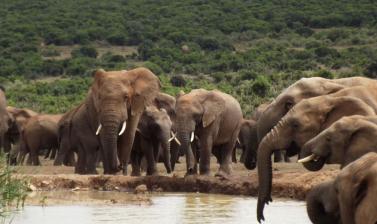 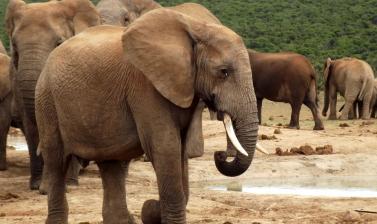