Researchers from the University of Oxford, Mpala Research Center and Save the Elephants, have used a combination of acoustic microphones and seismometers to locate elephants.

In this novel study, published to day in the Journal of the Royal Society, researchers managed to accurately determine elephant locations by measuring the vibration of the ground caused by their rumbles, which are low frequency calls. To do this, they used seismometers, which are seismic sensors typically used for measuring earthquakes and explosions. 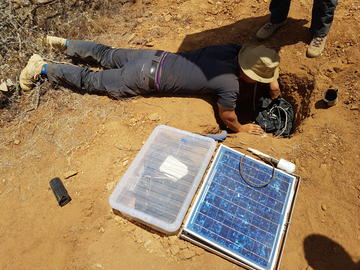 This interdisciplinary research, created in collaboration with computer scientists, earth scientists, conservationists, and biologists, used data gathered in Kenya, and is the first study to use seismometers to get locational information about elephants in the wild. Acoustic and seismic equipment was set up around a watering hole known to be frequented by elephants at the Mpala research center in Kenya, and paired with camera traps to provide additional data. Researchers discovered that the seismic dataset led to a more accurate localisation of elephants than the acoustic dataset.

Previous work has shown that seismic recordings can be used to differentiate between elephants’ activities such as walking, running and calling.  But seismic monitoring also provides information about other animals and their activities. In future work, the team hopes to develop ”listening rules” to detect what wildlife is close to these sensors and what they are doing, all based on their seismic “footprints”.

Dr Michael Reinwald, postdoctoral researcher at Oxford’s Department of Zoology, said “Seismic waves pass through lots of different solid materials between source and sensor, unlike the acoustic waves. It was therefore a surprise that the seismic sensors worked just as well as the acoustic sensors to localise the elephants, and in some cases the seismic systems worked even better"

From a conservation perspective, using seismic sensors alongside acoustic systems offers an alternative, and potentially more accurate, way of assessing situations. Where acoustic recordings would be influenced by rain, wind, and both human and animal activity, seismic monitoring would be impacted by other factors, such as geology and sensors are buried under the ground. 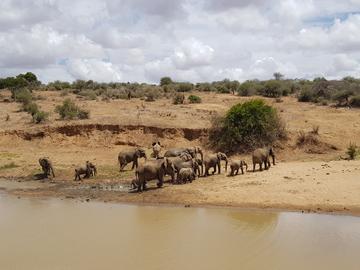 This is useful because it allows conservationists to have more data on where elephants are in different scenarios. Knowing whether or not elephants are present in protected areas, or if they’re going into environments with higher risks, allows for reactive responses, and can limit human-elephant conflict.

PI Dr Beth Mortimer from the Department of Zoology said, “This study is important as it shows that seismic information from elephant rumble calls is just as useful as acoustic information for locating elephants. This opens up further questions about how the elephants might be using seismic rumbles to communicate with each other in the wild.”

Moving forward, this allows researchers to develop novel and innovative ways to monitor elephant movement. This real time detection and localisation of both elephants and other wildlife will allow for more appropriate anti-poaching intervention and limiting wildlife-human conflicts.

Read the full paper, published in the Journal of the Royal Society, here: https://royalsocietypublishing.org/doi/10.1098/rsif.2021.0264