Almost every plant will be eaten by an insect at some point in its life. While the damage caused by plant-feeding insects is understood to impact the functioning or structure of plants and trees, we still know very little about how these changes affect larger-scale plant processes and the canopy ecosystems that they are part of.

The role of insects is usually not taken into account when estimating fluxes of carbon between forests and the atmosphere, or when predicting how changes in the climate might affect the intake of carbon by plants. However, our new study, published in the journal New Phytologist looks at how insects feeding on oak leaves can affect both the photosynthetic rate of these leaves, and whether or not these changes can alter the amount of carbon being absorbed by the tree.

We studied winter moth caterpillars, which are a common insect species that feeds on leaves of many trees, including those in Wytham Woods, Oxford. We found that the photosynthetic rate is substantially lower on leaves that have either been eaten by caterpillars, or on uneaten leaves, growing next to these leaves.

Next, we looked at how many eaten leaves there are in the oak canopy, compared to completely uneaten leaves surrounded only by other uneaten leaves. When we take into account the leaf-level changes, and the proportion of these different leaves in the canopy, we estimate that half of the potential photosynthesis on a level of the canopy is lost. This means that even a small amount of damage caused by caterpillars on an individual leaf, adds up to a huge amount of carbon not being assimilated through photosynthesis across the whole tree.

With the warming climate, many insect species are predicted to spread to new areas, or increase in abundance. If the effects we found in our experiment hold for other tree and insect species, the changing climate, through changing the ranges and abundances of insect populations, can alter how well the forests take up carbon in the future. Unless the effects we have measured are taken into account in climate predictions, the outcomes of these predictions might be misleading.

Earlier this year our research featured in the BBC documentary Judi Dench: My passion for trees.

Over the coming months we will explore if other oak leaf traits change simultaneously with the photosynthetic rate. This will involve measuring the chemistry of the leaves to see if the tree is producing defensive chemicals to protect itself from the caterpillars, which might be taking up resources needed for photosynthesis. We also aim to understand exactly how much carbon is being lost through a lowered seasonal rate of photosynthesis, and on the scale of the whole forest. 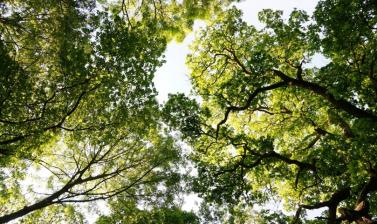 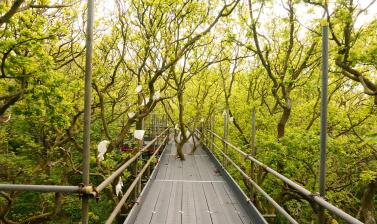 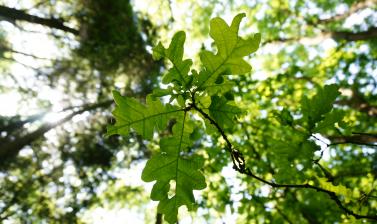 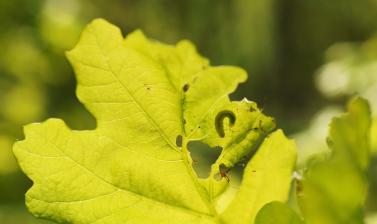